The tans have now faded, and the 35 degree temperatures are but a distant memory, however, it’s only 4 weeks ago that 16 Upper 4 and Lower 5 Gateways girls returned from a trip of a lifetime to Sri Lanka.  Hopefully, we can provide you with a snapshot of what they got up to on their travels!

A 9:15am meeting time at Leeds train station was the starting point for an epic 23 hour journey!  Qatar Airways then flew us to Colombo via a short stopover in Doha.  It should have been “plane” sailing, however, a slight delay in leaving the Manchester runway meant that we missed our connection in Doha!  Fortunately, the next flight for Sri Lanka was only two hours later and so our journey wasn’t extended by too long. 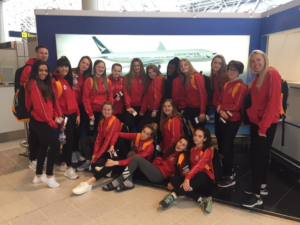 We touched down in Colombo at around 11:00am and, despite a luggage delay issue, we were able to get to the hotel for around about 1:00pm. Unfortunately, our first match was scheduled for 4:00pm and so we only had an hour to grab some lunch and turn around to head back to the Ministry of Sport in Colombo. The girls performed heroically well in their netball fixture but both the U15s and the U14s succumbed to a very strong opposition.  Had we been a little fresher and a little more used to the conditions, the outcome could have been a different one, however, the experience stood them in good stead for the remaining fixtures.  To put the result into context, the girls’ high school we were up against had 3000 students compared to our 300!  After the fixture, it was back to the hotel for a good night’s sleep! 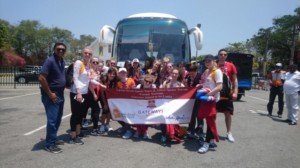 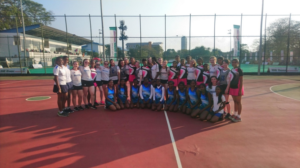 A slight change in the itinerary was needed as we opted for the girls to have a much need R&R session around the pool before travelling back to the Ministry of Sport in Colombo for their first hockey fixture.  The opposition was perfectly pitched as Gateways took the lead in the first session.  The lead then swapped hands as our girls tired in the heat however, a late rally almost forced an equaliser.  The end result was a narrow 1-2 defeat but this was an even match and the opposition’s hospitality and friendship was a fitting end to a well fought contest.  Following the match, it was back to the hotel for a bite to eat and another good night’s rest! A spot of shopping and a whistle-stop tour of Colombo was on the agenda for day 4.  This was followed, in the late afternoon sunshine, by our third fixture back at the Ministry of Sport.  As we walked from McDonald’s to the venue, we passed an English team playing cricket on a sports tour of their own.  They were playing a 50-over fixture that had begun at 11:00am and wasn’t due to finish until 5:30pm!  AND they were playing in black!  I think the 6 x 10 minutes hockey that the girls were about to partake in suddenly seemed a lot more appealing!  Another well-judged contest saw Gateways initially take the lead only to be pegged back again to 1-3.  A late rally saw Gateways claw one goal back, leading to a frantic final few minutes as they searched out the equaliser.  2-3 was the final score but this was a great effort once again, especially when considering they’d lost four players to either illness or injury!  Back to the Mount Lavinia hotel for the final night in Colombo before moving on the next morning. A travelling day for the group today as we transferred from Colombo up to Dambulla. We dropped our bags at the Camelia Resort & Spa and headed straight out for a late afternoon / early evening game drive in the Mineriya National Park.  We saw a variety of animals including storks and monkeys however, the main offering on this safari was elephants which we saw in their scores!  It was a beautiful evening and so nice to be able to see these magnificent creatures in their natural habitat.  There was a little bit of added excitement too as one of the groups offered a tow to another group who’d got stuck in the swamp!

We were up and off early to Kandy on day 6 via the breath-taking views at the top of Sigiriya Rock.  An ancient temple once stood on the top of this amazing natural monument and it took over a thousand steps for the girls to reach the top!  It was a day where one or two of the group needed to conquer their fears however, a couple of the girls suggested a zip line to get back down!  I’m not sure about that!  We then continued our journey to the Grand Kandyan hotel in Kandy where opulence and luxury were the order of the day.  A rooftop swimming pool overlooked the city and it was a welcome relief after a busy couple of days! 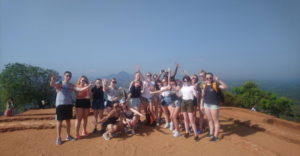 The Temple of the Tooth in Kandy was our first stop-off today which was a truly beautiful building and then the girls sampled the market in Kandy.  Some of them had never bartered before but they soon learnt how to!  After the market trip, the girls headed back to the hotel for some food before heading out to the University of Sri Lanka – Kandy, to play their final fixture of the tour.  Ironically, it was their easiest fixture and the indoor court also suited them down to the ground!  Both the U15s and the U14s won comfortably and the girls finally had their first win of the tour!  Again, we cannot thank our hosts enough as they made the match a real occasion! 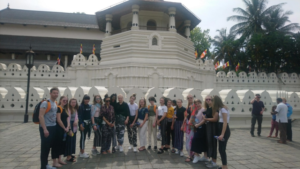 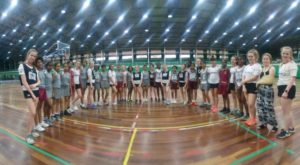 We moved on from Kandy and headed back to the coast on Friday morning but via a white water rafting experience.  A few of the group were slightly apprehensive but it was a relatively pain free trip!  The amazing scenery on the way to the river was beautiful!  For those interested in films, we paddled past the location where they filmed “The Bridge Over the River Kwai”.  After the cooling experience of the river, we moved onto the Waskadua Hotel about 30 miles south of Colombo. 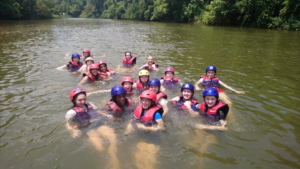 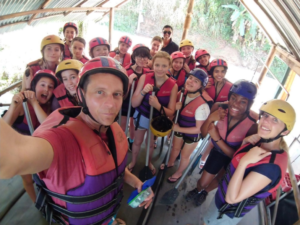 After a morning of relaxation by the pool,we headed a short distance south and took a boat ride on the Madhu River and looked at a traditional cinnamon farm.  Following the boat cruise, we went to the Turtle Hatchery and had the unforgettable experience of releasing baby turtles in the Indian Ocean at sunset.  For many, this lovely moment was probably the highlight of the trip!  Then it was back to the hotel for an evening meal and an unforgettable thunderstorm! 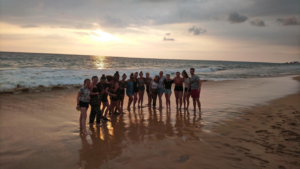 We cleared the itinerary for the day to enable the girls to have a complete day of relaxation by the pool and the chance to get their heads around the idea of packing!  It was a beautiful day and we even had time for a short presentation for the Players of the Tour and Lucy’s 15th Birthday!  It was then early to bed so we could be ready for our 5:45am departure! 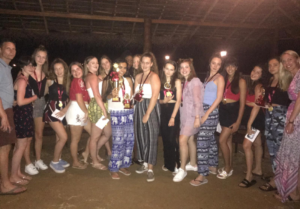 Another long day of travelling (starting at 5:45am!) with the whole group happy to see their families back in the UK!

It was a truly memorable trip and we would like to thank our sponsors (JN Bentley and Simon Falk Eye Care), Chandimal (our permanent tour guide) and Edwin Doran for making it such an excellent trip.